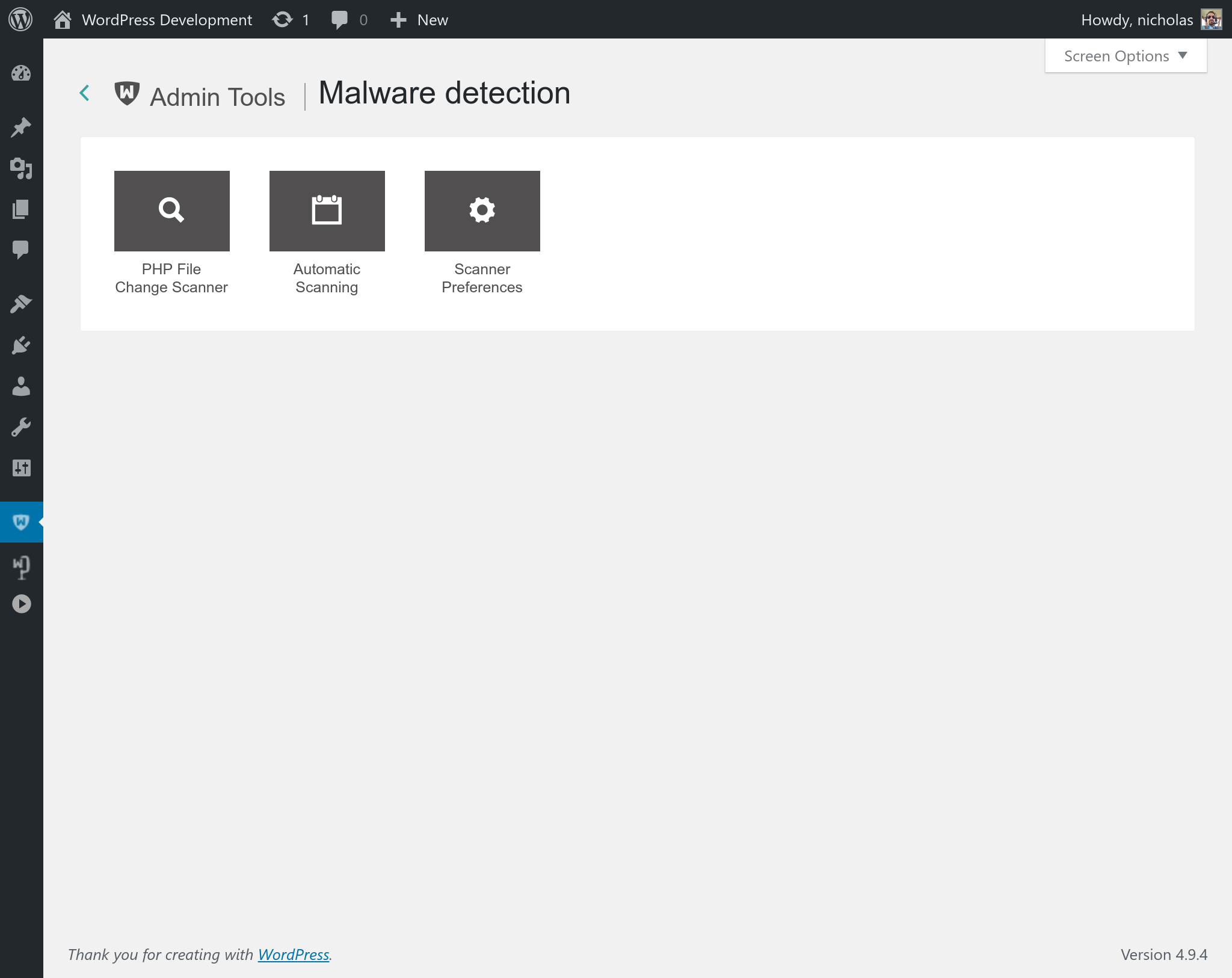 Admin Tools has a very powerful feature called PHP File Change Scanner. This feature can be used to perform a security scan of the PHP files included anywhere under your site's root directory, as well as detect any modified or added files in subsequent runs. The file scanning engine is built on top of Akeeba Engine, the engine powering our acclaimed Akeeba Backup site backup software, ensuring rock solid operation. Each scanned file also comes with a preliminary automatic security assessment ("threat score") which can give you a quick idea of how possible it is that the file in question could be suspicious (malware / hacked file).

The PHP File Change Scanner has more handy features. For example the ability to produce DIFF's (a synopsis of how modified files differ from the previous known copy), print and export the scan reports as well as the interactive report viewer which allows you to peek at the contents of each file. This feature can allow power users to detect and eliminate hacks much faster than using a purely manual method. You can also automate the run of the scanner engine using a CLI CRON job, making sure that you always know what's going on with your site.

How does it work and what should I know?

The PHP File Change Scanner is a hybrid between a backup engine and a file scanner. It works by "sweeping" your WordPress site for PHP files and comparing them to their last known state saved in the database. It will then report any changes, i.e. files which have been modified or added since the previous scan. The following paragraphs will explain how some aspects of the file scanning and reporting engine work.

Only PHP files are scanned. Only files with the extensions defined in the Scanner Preferences page are scanned. By default this is .php, .phps, .php3 and .inc files. Non-PHP files or PHP files whose extension is different will not be scanned. The idea of this feature is to scan only PHP files, because the modification or addition thereof could signify a potential problem or hack of your site. We only use the lowercase .php extension because this is the extension of virtually all PHP files and the other extensions are host-specific and not universal enough to guarantee that they do contain PHP code.

When a file change is detected. A file change is detected only if the file is added or modified since the immediately previous scan. This means that if you scan now, modify a PHP file and scan again, it will show up as modified. If you perform a third scan right after the second one, the file will NOT be reported as changed (unless it has a non-zero Threat Score and it's not Marked as Safe). This is normal. The file was changed between the first and second scan, but not between the second and third scan.

Threat score calculation. Whenever Admin Tools Professional encounters a new or modified file, it calculates a "threat score". This is a weighed sum of potential security "red flags". Essentially, Admin Tools Professional runs a few heuristics against the PHP file in question, looking for code patterns which are commonly (but NOT NECESSARILY) used in hacking scripts and hacked files. Each of those patterns is assigned a "weight". The weight is multiplied by the number of occurrences of the pattern to give a score. The sum of these scores is what we call a "threat score". How to interpret it: the higher the threat score, the more probable it is that this could be a nefarious file and its contents should be manually assessed.

Removing old scans has some consequences. When you remove an old scan, Admin Tools also removes all associated file alert records. If you have defined some files with a non-zero Threat Score as "Marked Safe" in this scan's report, then this information is lost when you delete this scan. As a result, subsequent scans will, again, report the file as "Suspicious".

Heavy resource usage. Scanning your site is a very CPU and memory intensive procedure. Admin Tools Professional has to scan your entire site, find the PHP files, read them, calculate an MD5 sum (very CPU and memory intensive process!), read data from the database, compare it with those in memory, write data to the database and repeat that for each file. This does put a big strain on your server, similar to what you get when you're backing up your site.

Potential problems. As stated above, the file scan operation is very database, CPU and memory intensive. This can cause failure of the scan process due to one of several reasons, especially on lower-end hosts (usually: cheap or low quality shared hosts):

All of the above manifest themselves as a 500 Internal Server Error message or a never ending scan process when trying to scan your site. Unfortunately, these are all server limitations and we can not work around them, while maintaining the usefulness of the PHP File Change Scanner feature. If you hit on those limitations, our recommendation is to switch to a better performing / higher-quality host.